Joint Entrance Exam (JEE) Main 2020 (January attempt) result was declared on 17th January. According to the official notice released by National Testing Agency (NTA), 8, 69,010 candidates had appeared for the JEE examination which was conducted from January 7 to 9. Nine candidates have scored a perfect 100 in the examination.

Three students of Allen Career Institute have placed themselves amongst the 9 aspirants of JEE Main 2020 (Jan Attempt).

“I gave equal importance to all the three subjects” – Parth Dwivedi 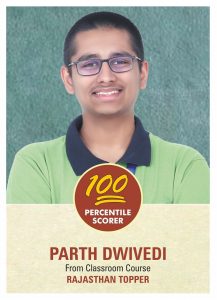 Parth Dwivedi, a resident of Bharatpur in Rajasthan, topped Rajasthan by achieving a 100 percentile in JEE Main. Parth has been studying at Allen Career Institute for the past two years. Earlier, he secured the sixth position in KVPY. Moreover, he successfully cracked the first stage of International Astronomy, Physics and Chemistry Olympiad. Apart from this, he secured 97 percent in his 10th standard board examination.

Parth told that for the preparation of JEE Main he religiously followed the guidelines of his teachers at Allen. “Many times, students study more in one or two subjects and devote lesser time to the third subject”; whereas, he gave equal importance to all the three subjects i.e. physics, chemistry, and mathematics.

To achieve this success, he first strengthened the weak topics of all the three subjects. Further, he stated, that before coming to Kota, he used to get very nervous with organic chemistry. But with the support of his teacher at Allen, he now has a good command over the subject.

Physics happens to be his favourite subject. Moreover, he said that he studies for three to four hours every day and made sure he attends his classes regularly. He loves playing guitar and watching movies. His Father Vineet Dwivedi is an officer in Railways whereas his mother Niti Dwivedi is Additional SP in Lucknow. His next goal is to crack JEE Advanced and make his way to IIT Bombay (CS branch). In the end, he stated that after finishing his graduation from IIT Bombay, he aspires to do something for the country.

“I prepared from the NCERT books” – Akhil Jain 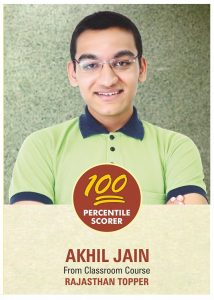 Akhil Jain, a resident of Vigyan Nagar in Kota, has achieved a 100 percentile in JEE Mains. Since the 6th grade, Akhil is a student of Allen Career Institute. And in 2017, he also secured a Gold Medal for the country in IJSO. Moreover, he awarded a fellowship in KVPY. Apart from this, in his 10th grade, he secured 93 percent.

Akhil said that for the examination he prepared from the NCERT books. And he also focused on the notes and the guidelines given to him at Allen. In addition to his regular classroom at Allen, he studied for three to four hours every day. Besides this, he used to do his homework daily on priority as it aided in revision and it helped him in knowing in his weak topics.

For recreation, he plays badminton occasionally. Right now his next target is to crack JEE Advanced. His Father Manish Jain is a businessman and mother Neetika Jain is a housewife.