ALLEN Classroom student, Vaibhav Raj, achieved phenomenal success by securing AIR 3 in the JEE Advanced 2020, the result of which got declared on October 5, 2020.

Right from the beginning, Vaibhav was sure of his success in JEE Advanced as his preparation for the coveted exam was thorough. He had come to Kota in the year 2018 with the dream of taking admission in one of the IITs. To carve the success path and get taught by the best in the industry, he joined ALLEN Career Institute.

At ALLEN, his life changed for good and he experienced a considerable boost in his confidence. With the right competitive environment and guidance of the proficient faculties, Vaibhav strengthened his preparation following a strategic approach. 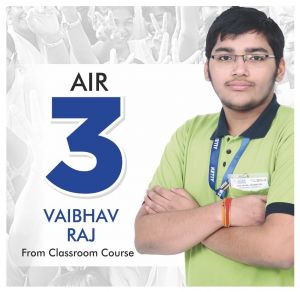 Sharing his success mantra, he stated, “Before coming to Kota, I used to get scared of chemistry but now it’s my favorite subject. I had prepared for JEE following a strategy. I made a list of all the chapters, took out the important topics, then studied them following a schedule”.

Apart from being the star performer in JEE Advanced, Vaibhav had proved his mettle previously in various talent exams. He won gold medal at IJSO. He secured 98% marks in class X board exams and 99% marks in class XII boards. He also happens to be an NTSE scholar and in JEE Main he had got AIR 45.

He was also selected for Camp in Physics, Chemistry, Math and Astronomy Olympiad. Moreover, in KVPY fellowship awards, he got AIR 21 in class 10 and AIR 7 in Class 12.

Vaibhav’s father, Sunil Kumar Roy is a Senior Scientific Officer in the Directorate General of Quality Assurance, in the Ministry of Defense while his mother, Sudha Roy is a homemaker. His elder brother Vishal Raj is studying at IIT Kharagpur.

The COVID 19 lockdown brought the whole country to a standstill. But Vaibhav says that he made the most out of this lockdown period and worked towards strengthening his preparation further. He revised his syllabus for JEE Advanced once again and while there was a little worry with the second-stage lockdown and postponement of exam but with the motivation by ALLEN faculties, he kept working towards his goal. Now that he has achieved his desired target, he looks forward to owning a startup after completing B-Tech in CS branch from IIT Mumbai.