Director, Sh. Brajesh Maheshwari said that nothing is impossible at ALLEN. The students of ALLEN have proved their excellence by delivering the best results this year. Nalin Khandelwal, two-year classroom student of ALLEN has topped NEET-UG 2019 by scoring 701 marks. Nalin has secured 95.8 per cent in Class 12th and 92 per cent in Class 10th. His Mother and father are doctors and elder brother is pursuing MBBS from SNMC Jodhpur. 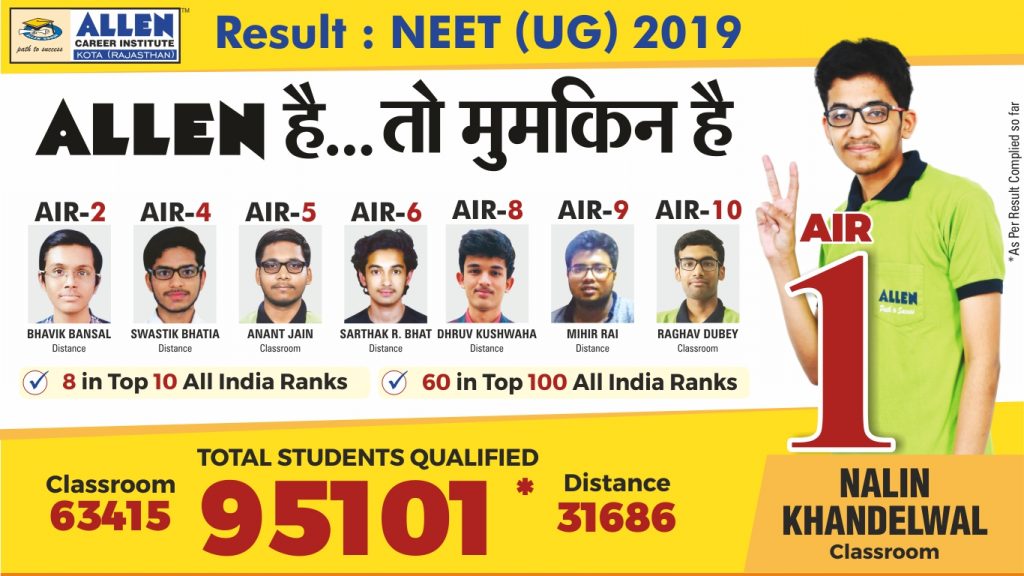 Maheshwari said that this year 15,19,375 students got themselves registered for NEET-UG. Out of which 14, 10,755 students gave the examination. NEET-UG 2019 Examination was held in 154 cities of the country in 11 languages. 6,30,283 male candidates and 7,80,467 female candidates gave the exam. Out of which 3, 51,278 males and 4, 45,761 females have qualified the exam. NEET cutoff percentile for the general category is 134 percentile and for SC/ST/OBC category is 107. While the cutoff percentile for Physically Handicapped general category is 120 and for SC/ST/OBC category is 107.

Success Stories: NEET-UG 2019 Toppers shared their secrets to success, routine during their preparation and some useful tips 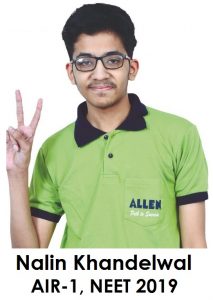 2 year classroom student of ALLEN Career Institute, Nalin Khandelwal secured All India Rank 1 in NEET-UG 2019. Rajasthan boy Nalin told that before giving the exam, he was confident of cracking the exam and securing a rank in Top 10. Nalin scored 701 marks in NEET-UG 2019. He said, “my parents motivated me to study. They always provided me with a positive environment. “Further, he added that ALLEN provides National level competition where a pool of talented students from all over the country study together to achieve their goal.  Joining ALLEN for the preparation of NEET UG proved a great turning point in my life. Nalin has secured 95.8 per cent in Class 12th and 92 per cent in Class 10th. His Mother and father are doctors and elder brother is pursuing MBBS from SNMC Jodhpur. 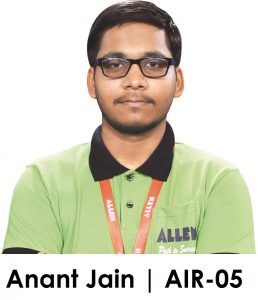 Anant Jain, a resident of Meerut, has secured All India Rank 5 in NEET-UG 2019. He told that his mother’s dream is going to come true. His elder sister Apoorva is pursuing MBBS from Shriram Murthy Medical College Bareilly while elder brother Samkit Jain is doing MBBS from AIIMS Nagpur. He further added, “ALLEN Career Institute provided the best environment for my preparation. At times I secured less marks in the test, but this didn’t affect me. Instead, I learnt from my mistakes and focused on those. The faculties always motivated me and cleared my doubts.”  Anant secured 86 per cent in Class 12th and has qualified KVPY in Class 11th.  “My mother did not sleep to wake me up. I used to wake up from her call. She used to call twice to make sure I was wide awake. I studied from 3 AM till 1 PM. There are three pillars of my success.NCERT syllablus, class notes and Allen modules. I want to become a neurosurgeon”, said Anant 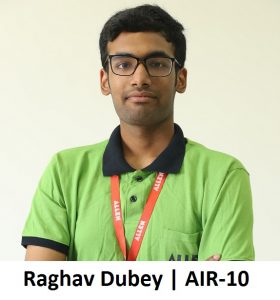 I believed in myself and I did it

Raghav, resident of Hoshangabad secured All India Rank 10 by scoring 691 marks. He said that” I believed and never doubted myself. I studied with full enthusiasm. In Kota, I have maintained a balance between board and NEET preparation.”  Raghav always focused on clearing the concepts and this helped him boost up his preparation. He secured 88.8 per cent in Class 12th. He further added,” I never targeted on rank but after giving the exam I was confident to get a rank in top 100. Apart from classroom study, I used to study for 7 to 8 hours. I consider regular study as my ‘key to success’. I studied with a proper schedule and gave equal time for each subject.” Currently, he is waiting for AIIMS 2019 result and wants to specialize in cardiology. 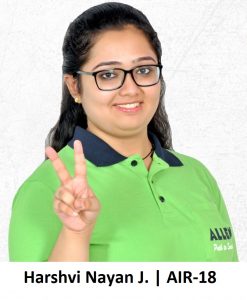 Harshvi a resident of Vadodara told, ” I had full faith in my hard work but never thought of achieving such a good rank. But I am happy throughout the year I focused on  my studies and revised daily.” Harshvi gave top priority to NCERT syllabus and focused on the topics asked in regular tests. In addition to the Daily Homework, Allen Modules, extra Question and Reference Books suggested in the classroom helped her to clear the concepts. She further added, ” I always focused on clearing the doubts. I used to ask the doubt at least 10 times and never hesitated to ask more.The faculties at ALLEN always helped me and cleared my doubts. They always motivated me. My parents have also contributed a lot in my success. Every weekend they used to visit Kota to meet me.” Harshvi secured 95.2 per cent in Class 12th and is Gujarat State Topper in NTSE Stage 1. She has also cleared both the stages of KVPY  in class 12th. 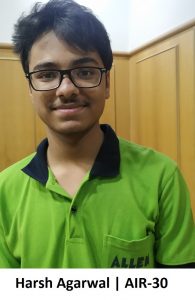 Harsh Agarwal scored 687 marks and got All India Rank 30 in NEET-UG 2019. Harsh said that he dreamt of becoming a doctor so joined ALLEN Career Institute 3 years ago to prepare for medical entrance exams. He said, ” faculties of ALLEN always guided me and I never studied for long hours. I used to do self-study for 4 hours. I studied with a proper schedule and gave equal time for each subject.” Harsh secured 94.2 per cent in Class 12th and has also qualified NTSE. His preparation for NEET-UG was entirely based on NCERT. I prepared for physics and chemistry at JEE Advanced level.  Apart from this Allen modules helped me a lot. I want to specialize in Cardiac or Neuro. Former President Dr APJ Abdul Kalam is my idol, said, Harsh. 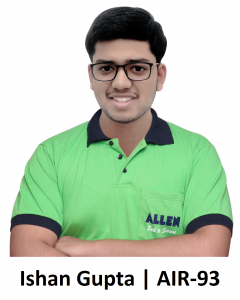 Student of ALLEN Career Institute Ishan Gupta is a resident of Chandigarh. He has bagged All India Rank 93 in NEET-UG 2019. Ishan believes that Self-motivation is the key to success. It is important to stay self-motivated, with this energy gets doubled. Ishan told, he used to do regular studies and used to revise on a daily basis. “Giving weekly tests helped me to realise my weak areas and  Allen faculties helped me to focus on my them which increased my strength.”  Focusing on NCERT and practising past years question papers is Ishan’s mantra of success. He is a student of ALLEN from last 4 years. Ishan has secured 95.8 per cent in Class 12th. He has qualified NTSE and is Chandigarh topper in NTSE Stage 1. Apart from this, he has qualified KVPY SA and SX stream, NSEC, NSEB and IMBO. Ishan’s parents are doctors. He used to rejuvenate by listening to music and dancing. 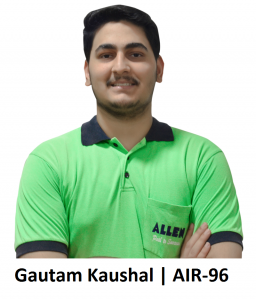 Practice is the key to success

Gautam received All India Rank 96 in NEET-UG 2019. He used to select questions while studying and solve them in different ways.  Gautam said that “I had finished my syllabus in January and did revision after that. This helped me to know my weak areas. Besides NCERT Syllabus, I also studied from Allen Modules.”  He studied for learning, not to gain marks. Gautam secured 96.8 per cent in Class 12th. He has qualified KVPY, NSEB and INBO. He wants to be an oncologist He made daily targets while studying and made sure to complete them before sleeping. After watching  TV  for some time, he did self-study from 10 PM  up to 2:30 or 3 PM.   “The system of the Allen Career Institute is the best, they have highly experienced and dedicated faculty who guide you at every step”, said Gautam. 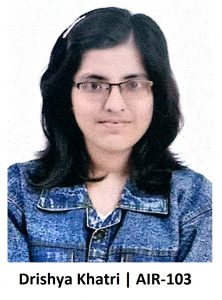 The biggest pleasure is to fulfil your parents’ dream

Drishya has secured All India Rank 103 in NEET-UG 2019. Drishya told that her parents wanted her to become a doctor and fulfilling their dream gives her immense happiness. She is a student of Allen Career Institute from last four years and has secured 94 per cent in Class 12th. Apart from this, she has qualified NTSE and KVPY. Drishya said, “While preparing for the exam I never focused on the rank, instead gave by best to work hard. After going home I used to revise, whatever was taught in the class. This helped me to prepare for the weekly tests. I focused on NCERT syllabus.  I used to discuss my doubts with the faculties after the classes The credit of my success goes to Allen faculties and my parents. Being a working woman, my mother took care of me, she also took 2 months leave during my examination.” Drishya wants to become a cardiologist or neurologist.