The students of ALLEN Career Institute have proved their mettle in All India Institute of Medical Sciences (AIIMS) MBBS 2019.

9 Students of ALLEN Career Institute have secured a position in Top 10 AIR.

Director, Sh. Brajesh Maheshwari said that the students of ALLEN have proved their excellence by delivering the best in the most prestigious medical entrance exam of the country, All India Institute of Medical Sciences (AIIMS) MBBS. ALLEN students have secured a position in top 10 AIR. 7 students are from ALLEN Classroom while 2 are from DLP. 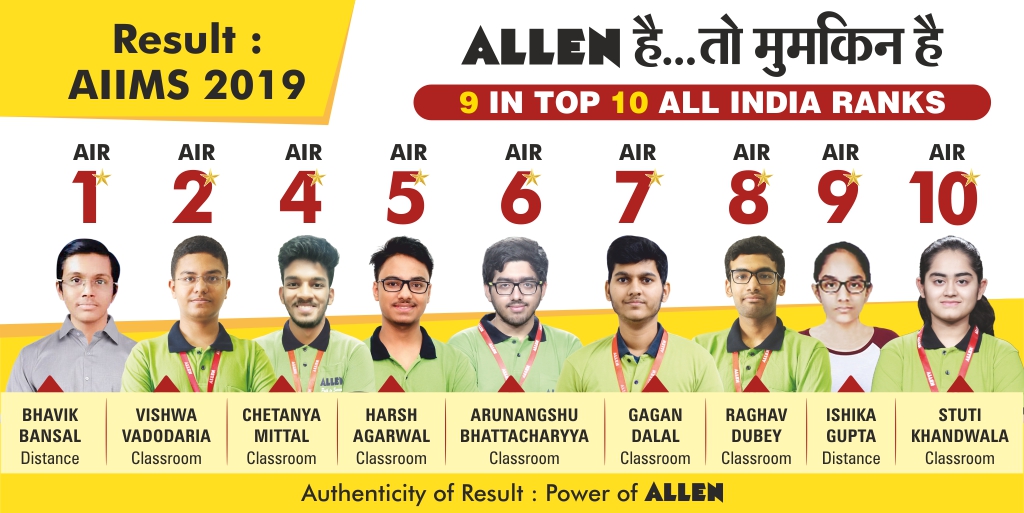 He further added that Bhavik Bansal, a student of ALLEN DLP has secured AIR-1. While Classroom students, Vishwa Hitendra Vadodaria secured AIR-2, Chetanya Mittal secured AIR-4, Harsh Agarwal secures AIR-5, Arunangshu Bhattacharyya secures AIR-6, Gagan Dalal secures AIR-7, Raghav Dubey secured AIR-8. Along with this ALLEN DLP student Ishika Gupta has secured AIR-9 and ALLEN Classroom student Stuti Khandwala has secured AIR-10.
AIIMS MBBS exam was held on 25th & 26th May 2019. The exam was conducted in two shifts – the first shift was from 9:00 AM to 12:30 PM while the second shift was held from 03:00 PM to 06:30 PM. The computer-based exam was conducted across 125 cities in the country. Candidates who have qualified the exam will be eligible for admission to 1,207 MBBS seats, including 7 seats for foreign nationals at AIIMS New Delhi.

Success Stories: AIIMS 2019 Toppers shared their secrets to success, routine during their preparation and some useful tips

If concepts are clear, studying is fun

ALLEN Career Institute’s Classroom student Vishwa Hitendra Vadodariya has secured All India 2nd rank in AIIMS. Surat’s resident, ALLEN Student Vishwa secured All India Rank 113 in NEET and All India Rank 71st in Jipmer. ALLEN Career Institute Kota 2 year Classroom student Vishwa has passed the 12th class with 91.2 percentage marks this year. In addition to Classroom coaching for four and a half hours, he used to do self-study for six hours. ‘Biology is my favorite subject. During the classes, used to select questions and used to solve them in many ways, this practice is what I considered as my success. I had finished the entire Syllabus till January and after that did my revision.’ Through this I could figure out my weaker points. ALLEN not only teaches students with the objective of success but also to get them all in the All India ranks. To solve the questions, he took help from teachers through social media. If the concept of a subject is clear, it gets fun to study. Not only physics, chemistry, and biology, your general knowledge should also be strong. Father Hitendra Vadodariya works at a private company, while mother Sonal Vadodariya is a housewife who has been living with Vishwa in Kota for the past two years. Elder sister Neelam is preparing for CA. After doing MBBS from AIIMS, I would like to do specialization in neuro.

ALLEN Classroom Student Chetanya Mittal has secured AIR 4 in AIIMS MBBS 2019. He has bagged AIR-261 in NEET-UG 2019 and AIR-5 in JIPMER 2019. Chetanya has scored 97.8 per cent in Class 12th and is a student of ALLEN from last five years. He said, My dream was to become a doctor and now my dream is going to come true now. My parents are doctors. They always provided me with a positive environment and motivated me to study.

Chetanya used to sleep at 12 o’clock in the night and woke up at 9:00 AM. After waking up, he used to go for a 1-hour jog with his father. Apart from the regular classroom, he studied for 6 to 7 hours. Chetanya prepared Physics and Chemistry at the level of

JEE Advanced. He focused on NCERT for the preparation of biology.“The system of the Allen Career Institute is the best, they have highly experienced and dedicated faculty who guide you at every step”, said Chetanya.

Harsh Agarwal secured AIR-5 in AIIMS MBBS 2019. He scored 687 marks and got All India Rank 30 in NEET-UG 2019. Harsh said that he dreamt of becoming a doctor so joined ALLEN Career Institute 3 years ago to prepare for medical entrance exams. He said, ” faculties of ALLEN always guided me and I never studied for long hours. I used to do self-study for 4 hours. I studied with a proper schedule and gave equal time for each subject.” Harsh secured 94.2 per cent in Class 12th and has also qualified NTSE. His preparation was entirely based on NCERT. I prepared for physics and chemistry at JEE Advanced level. Apart from this Allen modules helped me a lot. I want to specialize in Cardiac or Neuro. Former President Dr APJ Abdul Kalam is my idol, said, Harsh.

ALLEN Classroom student Arunangshu B. topped JIPMER MBBS 2019 and secured AIR-19 in NEET 2019. He has bagged AIR-6 in AIIMS MBBS 2019.
Arunangshu a resident of Surat is a student of ALLEN Career Institute from last 5 years. He studied in ALLEN Surat in Class 8th to 10th while in Class 11th and 12th he was a student of ALLEN Kota. He secured 94.8% per cent in class 12th.
Arunangshu B. said, “I emphasized on revising. My endeavour was to revise one chapter at least once a week. Apart from regular classes, I did self-study for 6 hours. I made sure that I sleep for at least 7 hours. My parents are engineers but I had an interest in biology from the beginning. After MBBS, I want to do specialization in Neuro or Cardio.”

I believed in myself and I did it

Raghav, a resident of Hoshangabad secured AIR 8 in AIIMS MBBS 2019. He bagged All India Rank 10 in NEET-UG 2019 by scoring 691 marks. He said that” I believed and never doubted myself. I studied with full enthusiasm. In Kota, I have maintained a balance between the boards, NEET and AIIMS preparation.” Raghav always focused on clearing the concepts and this helped him boost up his preparation. He secured 88.8 per cent in Class 12th. He further added,” I never targeted on rank but after giving the exam I was confident to get a rank in top 100. Apart from classroom study, I used to study for 7 to 8 hours. I consider regular study as my ‘key to success’. I studied with a proper schedule and gave equal time for each subject.” He wants to specialize in cardiology. 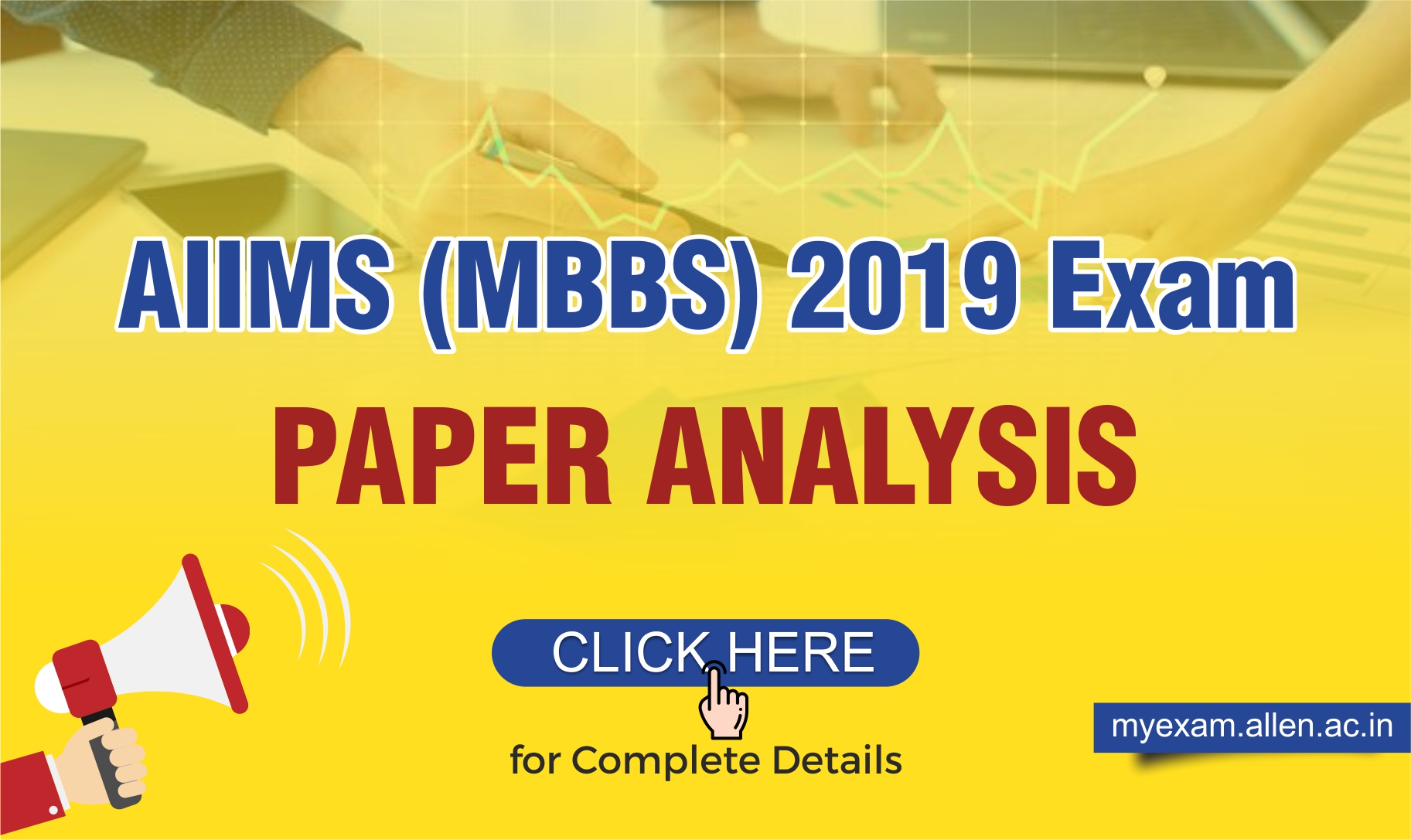